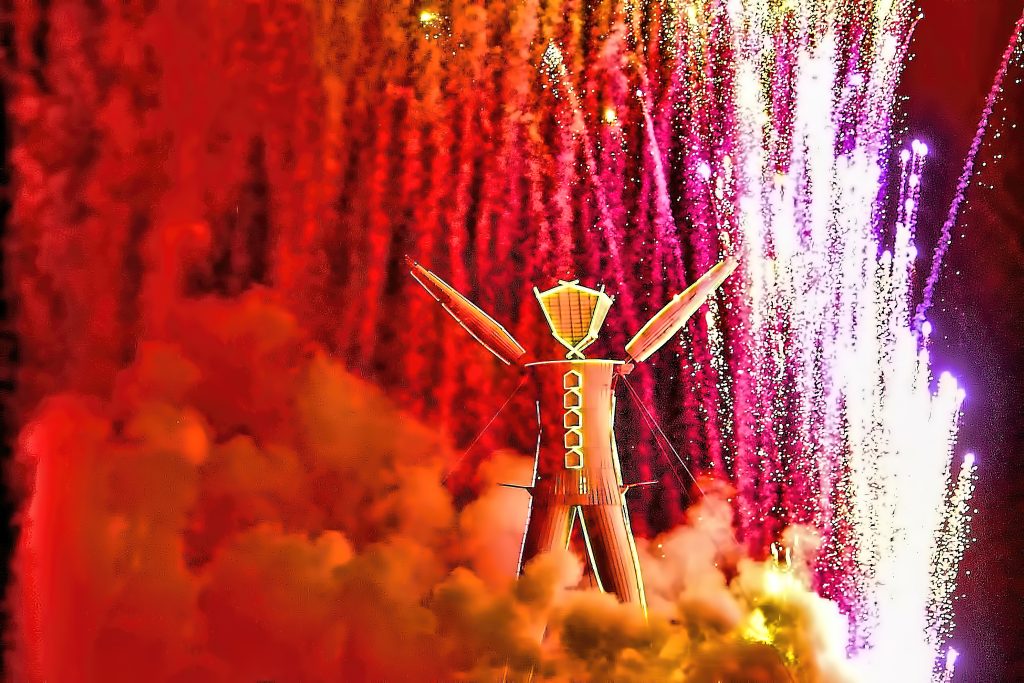 This wild nine-day cultural event in the Nevada desert is frequented by celebs, hippies and tech moguls

Burning Man is an annual, nine-day gathering in the Nevada desert. It’s held the week prior to and including Labor Day weekend each year (so it’s August 28 through September 5 this year) and includes artistic performances, imaginative artwork, music, and a lot of partying. Burning Man is not a festival. It’s a city wherein almost everything that happens is created entirely by its citizens, who are active participants in the experience. The entire city is literally built from scratch each year.

“Burning Man is not a festival. Burning Man is a community. A temporary city. A global cultural movement based on 10 practical principles,” the official website states.

A few of these principles include unwavering inclusion (anyone can be a part of Burning Man), gifting, decommodification (no money passes hands), self-reliance, self-expression, leaving no trace behind, and participation.

Once a year, tens of thousands of planners and volunteers gather in Black Rock Desert to create Black Rock City, a temporary metropolis dedicated to community, art, self-expression, and self-reliance. In this crucible of creativity, all are welcome.

Because no money is exchanged at Burning Man, participants (called Burners) are expected to bring food, supplies, shelter, and anything else they might need. The cost of a ticket, however, starts at $425. The total cost of attending Burning Man is estimated to range from $1,000 to $20,000, including transportation, food, camp fees, costumes, and gifts.

The name “Burning Man” comes from the symbolic ritual burning of a large wooden sculpture (“the Man”) that usually takes place on the Saturday evening of the event. The event originated on June 22, 1986, on Baker Beach in San Francisco as a small function organized by Larry Harvey and Jerry James, the builders of the first Man. For the next four years, the annual fire party was held at Baker Beach in San Francisco. In 1990, the Park police interceded to prevent the culminating burning of the statue, so the event was moved to Nevada.

Burning Man does not book any entertainment for the event, but instead encourages participants to perform for the community free of charge. People wander around the camps on foot, bicycles, and scooters, cook together, dance, drink, make art, and generally just enjoy the experience. Because no money changes hands, Burners can participate in activities such as wine tastings, zip lining, and massages — all given out by various attendees for free.

Burners bring everything they need with them — and then pack it out with them afterward. The only things you can buy there are coffee and ice. That means attendees must bring their own shelter, food, water, sunscreen, and whatever else they might want or need. The website suggests participants bring a bicycle to get around and “toys or costumes with which you can express your creative spirit.”

Burners go all-out in expressing their creative spirits with their costumes. People often wear extravagant, creative outfits with plenty of color and embellishments such as feathers, glitter, and beads. Many wear fancy hats or headpieces. You might see Burners wearing long golden capes, giant wings, unicorn horns, feathered mohawks, or stilts. Basically, the wilder the outfit, the better.

Each year’s festival is given a theme. In 2022, the theme is “Waking Dreams,” which will explore the transformative power of dreams, both literal and figurative, and celebrate the dreamers who channel this potent energy in eye-opening, often surrealistic, sometimes life-changing ways.

Burning Man closes with the burning of the Temple Galaxia, a 65-foot wooden structure that symbolizes how the fabric of the universe connects all living beings. For the burning of the temple, people create memorials for deceased loved ones and past relationships.